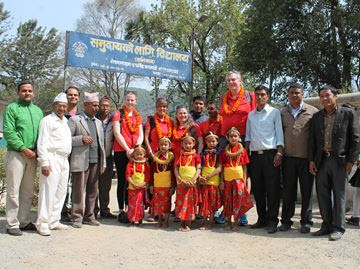 As the scale of the devastation wrought by Saturday’s deadly earthquake in Nepal continues to emerge, nearly 5,000 schools are estimated to have been completely destroyed — which is expected to have a devastating long-term impact on the lives of children.

In Gorkha alone, it is estimated 90% of the district’s 500 schools have been destroyed or badly damaged, affecting 75,000 school children.

“A routine school environment is one of the best ways to return children to a sense of normality and to talk about their experiences with their peers, helping them to recover from the trauma of the disaster.”

Meanwhile, tens of thousands of children spent a fourth night sleeping outdoors in the pouring rain, unable or simply too afraid to return to their homes. Many sustained injuries in the earthquake or have seen their family members hurt or killed.

Through the funds raised in this campaign, One Million Words Organization will be able to supply over 5,000 much needed class set textbooks, once the schools start again in September and will be able ensure that whilst their lives have been heavily disrupted by this disaster  the children are once again given the chance to succeed in life.

In early April One Million Words was able to make a second donation to an elementary school in Mindanao. Tigbawan Elementary School located at Don Leon Ballante, Caraga, Davao Oriental was presented with over 200 books by our OMW staff and directors in the Philippines.

Tigbawan Elementary School teaches students in grades first through sixth in Caraga, Davao Oriental of Davao (Region XI). The school has 5 instructional rooms and 0 non-instructional rooms, which are all powered by a power grid. With 150 students, class size is around 30 students. Honey Lou F. Pinero is in charge of the school, acting as the school’s Teacher.

Tigbawan has a total of 5 rooms – all of which are used for instructional purposes. All in all, the school has at least one general academic classroom and kindergarten classroom. Of the instructional rooms, all of them are standard rooms, meaning they meet the DepEd’s guidelines for safety and usability.

In April 2000, in a wave of new millennium optimism, world leaders promised to deliver something at the beginning of the 21st Century that in many developed countries had been taken for granted by the end of the 19th Century:   Primary education for all children.

There are still 58 million missing primary school, 100 million who do not complete primary school and 250 million children have schools of such poor quality that they leave unable to read a single sentence

This basic gap was going to be fixed within 15 years, so that by April 2015, the unacceptable position of millions of children never even beginning school would be consigned to history.

This was one of six Education for All pledges, which included targets such as girls having equal access to learning, and a halving of adult illiteracy.

Kofi Annan, UN secretary-general at the time, said that getting this completed by 2015 would be the “test of all of us who call ourselves the international community”.

Well, here were are in their future.

How many of the pledges were fulfilled? None of them.

But the optimism of the window that opened at the end of the Cold War gave way to the anxiety of 9/11 and then the austerity of the financial crash.

The final evaluation shows substantial progress, particularly in parts of Asia, but there are still 58 million children missing primary school, 100 million who do not complete primary school and 250 million who have schools of such poor quality that they leave unable to read a single sentence.

The obstacles that have confounded countries, particularly in sub-Saharan Africa, have been lack of funding, lack of political will, a willingness to tolerate extreme poverty alongside extreme wealth, a rising population and the relentless destabilisation of conflict and war.

The six Education for All targets were:

On a more practical level, it’s hard to run a school system without a reliable way of training and paying teachers, and when schools lack basic services such as electricity and sanitation.

The lack of access to education is not evenly spread. Poor girls, rural families and children from groups who are discriminated against, all end up more likely to miss out on school.

A lack of fairness within countries has been a barrier, as well as the differences between high and low-income countries.

All the evidence shows that for individuals, as for entire countries, the quality of education is often the key factor deciding the places in the global economic food chain.

And millions of youngsters never get a chance to get off the bottom.

There is going to be another milestone world gathering next month to decide another set of targets for 2030.

And the choice of location in South Korea is a signpost to how much a country can improve its education system in a short space of time.

It shows what can be possible. And it’s perhaps worth thinking about what else has arrived since the education pledges were made in April 2000.

Unlike building primary schools, somehow these all proved possible.
(http://www.bbc.com/news/education-32204579)

Children from disadvantaged backgrounds can fall behind their peers in vocabulary by the time they reach primary school. Photograph: Image Source/Rex

Poorer children who fall behind in reading at an early age earn around 20% an hour less in later life, according to a study commissioned by the Read On. Get On. campaign, which says poor-quality nursery provision is letting the most disadvantaged children down.

Campaigners say the quality of private nurseries – which make up 75% of England’s provision – is too variable and weakest in the most disadvantaged areas.

Half of England’s privately run nurseries do not employ a single graduate teacher, according to research by the group, which warns that this is contributing to literacy problems among children.

“On average, children from low-income families are nearly 12 months behind their better-off peers in vocabulary by the time they start school,” the report says. One in five children in England cannot read well by the time they leave primary school, while this figure rises to one in three among children from disadvantaged backgrounds.

Dame Julia Cleverdon, the chair of the Read On. Get On. campaign, says all nurseries should have at least one early-years trained graduate. “By providing quality and qualified teaching in every nursery, we can ensure every child arrives at school with the building blocks in place to learn to read and succeed.”

Research conducted by the Institute for Fiscal Studies for the campaign group suggests that disadvantaged children who fall behind in reading earn far less in later life.

It used data from the British Cohort Study – which follows the lives of 17,000 people born in England, Scotland and Wales in a single week of 1970 – to see how children have fared in later life. Individuals included in the survey sat a reading skills test aged 10, which researchers used to benchmark their literacy.

It found that, among poorer children, those who were the best readers at age 10 go on to earn 20% more per hour on average at age 40 than those with the weakest reading skills. This could be equivalent to an extra day’s wages each week: a 20% increase in hourly pay for those on the lowest incomes would make the difference between earning the minimum wage and the living wage.

Read On. Get On – a coalition of charities, teachers, parents and businesses – is calling on politicians to ensure that by 2020 all nurseries, especially those serving disadvantaged children, have at least one early-years trained graduate. It estimates that this would require 11,000 more graduates.

At the moment just 13% of staff in independent nurseries have a relevant degree.

The report suggests offering nurseries that employ an early-years teacher an increased early-years pupil premium of £1,300 for three- and four-year-olds.

Purnima Tanuku, the chief executive of the National Day Nurseries Association, said extra funding would be welcomed by nurseries.

“At present, nurseries receive an average of £3.80 per hour from local authorities to deliver the government’s free places for three- and four-year-olds. That doesn’t cover the cost of childcare, let alone staff development,” she said.

“To suggest that nurseries are lacking quality in terms of early-years education is unfair. Despite a chronic funding shortfall, nurseries already make a huge educational difference – particularly for underprivileged children. Internationally respected research has underlined this.”

John Cridland, the director-general of the CBI, added that investing in early-years education is essential: “Without the ability to read well, access to the skills, knowledge and understanding needed for a career is difficult.”

Blog page for One Million Words